On a cold winter day, in the early months of 2008, I got an email from my younger sister, Naomi, who was living in California. At that time in my life, my son Ethan was an active 5 year old and my son Noah had just turned 2. Due to Noah’s fragile medical condition, we were forced to live in isolation, taking him out only for doctor’s appointments or admissions to the hospital, which were frequent.

Her email explained that she had met a young single gal in her early 20’s, named Julia, who was looking for work for the upcoming summer months. She mentioned that Julia loved children and was thinking about finding a nanny position. She went on to say that she knew we were not looking for such a thing, but that God had laid it upon her heart in mentioning it to us and who knows, maybe if we would consider it, Julia could come and live with us for the summer and help me out at home.

She was right. My husband and I had never considered having someone come and live with us to help us out. Lord knows however, that as much as I didn’t want to admit it, my husbands 80+ hour workweeks and living in isolation was wearing on me. So we talked about it, prayed about it, and the more we thought about it, we started to get a real sense of peace that this would be the right thing to do and considered the benefits it could have for all of us. It would provide a job for her and it would allow me to take Noah to the doctor without having to bring Ethan along. It would allow us to train her to care for Noah so I could also have some one on one time with Ethan as well…something that was difficult to do as Noah required so much time and care.

Trusting my sisters judgment that this would be a good girl for us to have, we eventually got in touch with Julia and on a leap of faith and courage – from her and us – the arrangements were made for her to move in and live with us for 3 months that summer.

When she arrived from California to South Dakota that day in May, an immediate connection was made and I knew that God had led us to the right decision. That summer went wonderfully. I was provided with a new friend and someone to be around to talk with. We spent time teaching her and despite not having a medical background, she quickly picked up the medical knowledge in learning how to care for Noah. The boys gained a new friend as well and she loved on them in the most beautiful way. She learned sign language to help communicate with Noah and watched many “Signing Time” videos with him. I was able to spend quality time with Ethan and I was also able to take Noah to the many doctor appointments without having to haul Ethan along. My husband and I were able to spend some date nights together without worry. It was a true blessing!

I also came to find out that she was in the midst of experiencing raw grief. A little girl whom she was very close with was killed from being hit by a car while riding her bicycle and I was able to spend time listening to her and helping her process that. Also, during that particular time in her life, she was attending college and was struggling to know exactly how God was leading her and what career path to take. After seeing how well she picked up on the medical knowledge, I encouraged her by stating that I thought she would do well in the medical field, either as a nurse or working in child life services. Either way, we let her know that we would be praying for her and asking God to make her path clear.

It was a sad day to say good-bye to her at the end of that summer, but we knew that a lifelong friendship was made and we would keep in touch.

This past year on a Tuesday afternoon in early October, I pulled up a chair and sat next to the desk of a young boy with Down-Syndrome whom I have the privilege of spending one on one time with in class a couple days a week. It was time for Bible and that particular day, the class was studying the book of Esther, specifically the familiar story in Esther chapters 4 & 5. Many times, I find that even though I am in the room helping out one particular child, I am the one who is blessed in some way. This specific day, I found myself smiling over the story, listening and being reminded of the truths it held, and watching the kids as they soaked it in.  I sat and thought about the many different paths that the Lord has put me on, many of which I least expected.

Later that same day after the boys and I arrived home from school, I was in the kitchen doing the usual multi-tasking of preparing supper and Noah’s evening medical cares.  My phone ringed a tone that notified me of a new text message and as I pulled it up, I smiled to see that it was from Julia as it had been awhile since we had last spoken. She had since moved from California to Kansas City, MO and had been living there for several years, working as the Children’s Ministry Director of the church she was attending. However, as God would have it, she recently felt the calling to pursue her studies to becoming a nurse and is currently attending school for that.

As I read her message, it stopped me in my tracks. 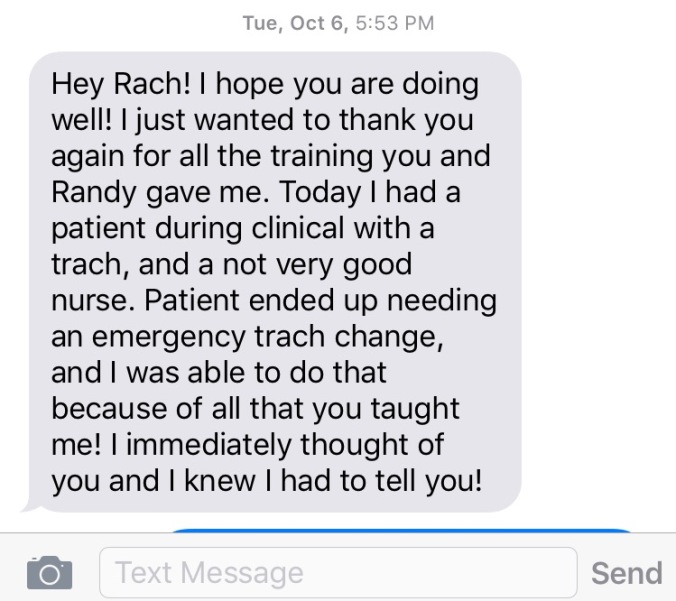 Immediately, my thoughts went back to the story of Esther that I had been reminded of earlier that day as I sat in the 5th grade classroom.

“And who knows, but that you have come to royal position for such a time as this?” Esther 4:14

Tears filled my eyes, as I knew without a doubt that the Lord was allowing me to see how even 8 years later, His plan from that stressful time was still being fulfilled. Only He could arrange for a young girl from California whom we had not met to move in with our family for the summer; for a lifelong friendship to be born and encouragement to take place; for the chance to teach her specific medical knowledge; for us to be there for each other in a variety of ways and to experience great joy when we both needed it most; and now knowing a young child was laying in a hospital room with a trach who experienced a life threatening crisis was saved because of it.

Friends, if you have ever once questioned it, I want to remind you today that you have a purpose! God has a specific calling on your life, whatever that may be, and you matter!

Maybe you feel stuck in life and just do not know which way to turn or what path to take. Pray for wisdom and trust that He will lead you to it.

Maybe you are a stay at home mother or father who is weary from the day-to-day life of raising your little ones. Pray for wisdom, strength, endurance, perseverance and energy and focus on raising those little ones to love the Lord. After all, that is the most important job a parent has!

Maybe you are on a busy career path and have no time to even breathe. Pray for wisdom to know which areas need to be let go of and then have the courage to do it.

Maybe you find yourself with an unexpected new opportunity and you are wondering if you should go for it. Pray for wisdom, take time to listen to His voice, and then act!

No matter where you find yourself right now, only you can be responsible for yourself before God. Only you can choose to follow God’s will. You may be one brave decision away from the most important change in your or someone else’s life. Will your faith and courage be tested? You better plan on it! But also plan on experiencing the joy that comes from knowing you are fulfilling the purpose that God has for you.

You were created for such a time as this! You just never know how God is going to use you when you least expect it.

And maybe someday, even if it is years down the road and in the most unexpected way and time, you will get the blessing of knowing without a doubt that He is still at work stemming from a time in your life where you were just doing your best to survive.

Like Esther, pray for wisdom and walk forward in courageous, trusting, obedient faith.

Who knows, you might even end up saving a life!

Linked up at #TellHisStory

4 thoughts on “You Have A Purpose”